The evolution of confusion

"Meat on the Bones"  This is about the earliest version I could find of Confusion, a song many
considered one of my best. But this version certainly isn't. This is from a tape labeled Practice Tape 1
from 1986, recorded to a boom box in the spare bedroom at my Pershing house. There's a little
background talk between Drummer Robert & myself about tempo & an extended jam ensues.
(Beware,this runs about 7 minutes) I had a fair amount of original songs I was introducing Robert to, & "Meat on the Bones" is in our conversation referring to leaving the general idea of the song intact, but the songs were "skeletons" we could build on.
John & Rob Live This instrumental version was recorded in the new studio at Nation Wide storage in San Bernardino in 1988. Still just the two of us but we've improved over a couple years now.
John solo acoustic  Here's a bit more refined version with vocal & guitar. Probably recorded, again on the boom box, at the dining room table on Pershing. My 88th song, it's featured on
Archive VI.
Here's the original lyric.

My good friend Abdul Binhimaid recorded this video of a practice session Robert & I had on 7/26/88
​in our newly carpeted studio at Nation Wide Storage in San Bernardino.
Impact Live This version includes Jeff Adams on lead guitar & Tom Pinkham on bass as well as Robert on drums (& helping me on vocals) along with myself on rhythm guitar & vocals. Recorded to boom box at the Nation Wide Studio, this is the closest Impact came to being a full band, Shortly after this the studio was broken into & most of our equipment was stolen. I paid back the guys for what was lost, but it signaled the end of the group & the beginning of a period of me working alone
or with guest musicians doing specific tracks as I transitioned to 4 track recording.
Impact-Ground Zero This final version was created on my Tascam Porta One 4 track cassette recorder at the Studio. Robert handled the drums & I did the rest, Used a little Yamaha Portasound PSS-480 keyboard for bass & a synthesizer part. It's a far cry from the humble beginning at the top of this page. but still not as good as it could be. This version wasn't meant to be the final product,it was meant to be an acceptable version to be used as a demo to shop to a Producer or A & R person. I did send it out a few times, but, unfortunately, it never struck the right cord (!) with anyone. 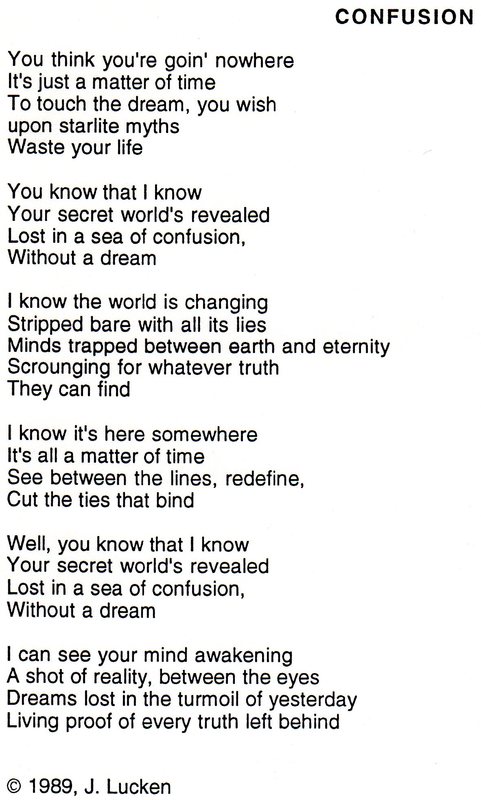 In Conclusion  Thanks for hanging in there! I know this is probably mundane for most people, and
I'm probably just doing this for myself anyway, but I've had fun looking back at a fragment in time, of
my life, & I'm glad I have a record of it. Here's hoping we overcome any Confusion in our ​lives.
​Peace.
Proudly powered by Weebly